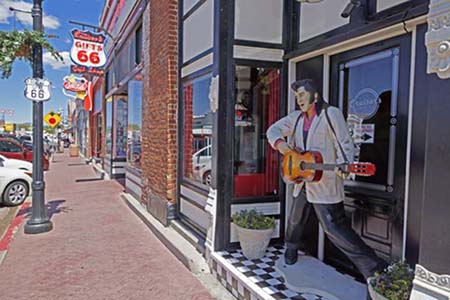 Surrounding Bill Williams Mountain are valleys and meadows that attracted sheep and cattle ranchers after the Civil War. Land speculators, anticipating construction of a new transcontinental railroad, made claim to what are now the various neighborhoods of Williams. In 1881 the first post office was established. The railroad, best known as the Sante Fe Line, arrived on September 1, 1882 and Williams quickly became a center for the railroad, ranching and lumber industries. Trips to the Grand Canyon by buckboard and stagecoach at this time, was the start of the tourism industry that has flourished to this day.

Williams had a reputation as a rough and rowdy frontier town by the turn of the century. Its saloons, brothels, opium dens and gambling houses catered to the cowboy, logger, Chinese laborer and railroad worker seeking entertainment. Many of these businesses of vice and pleasure were restricted by ordinance to Railroad Avenue’s ‘Saloon Row’.

The Saginaw Lumber Company opened a large sawmill in 1893 and harvested millions of board feet of lumber a year for almost 50 years, from the newly established Grand Canyon Forest Reserve surrounding Williams. The Reserve became the Kaibab National Forest in 1934 and has shifted the use of the forest towards recreation and Eco-tourism in recent years.

In 1926, US Highway 66 was established through Williams and served the automobile-touring public as part of the “Main Street of America”. Williams became the last “Route 66” town to be by-passed by Interstate 40 in 1984, the same year the downtown business district was placed on the National Register of Historic Places.