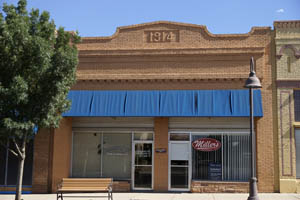 Clarkdale was founded in 1912 by William A. Clark, who owned Jerome’s United Verde Copper Company. It was the very first planned community in Arizona. The copper smelter operation was located in Clarkdale, prompting one resident to declare, “Jerome mined, Clarkdale refined.”
Since Clarkdale was a company owned town, it went through many ownership changes until 1953 when all mining operations ceased. Dissatisfied with the management of the various owner companies, the citizens of Clarkdale sought to incorporate. It is for this reason that though completed as a model company town in the 1930s, it was not until 1957 that Clarkdale was incorporated.
Clarkdale was built on three levels. At the top, was the business district, with municipal buildings, a library, clubhouse, schools and the finest homes, which were rented to the town’s most important families. The second-level homes were designated for blue-collar workers, and on the bottom—on the banks of the Verde River , were dwellings for Mexican laborers. Renters paid by the room, with a surcharge for baths and showers. The average monthly cost was about $16.

Many of these historic structures still stand, contributing to Clarkdale’s small-town charm. Main Street , with its wide streets and sidewalks, is very walkable. At one end is St. Cecelia’s Catholic mission, which hasn’t changed much in a century.