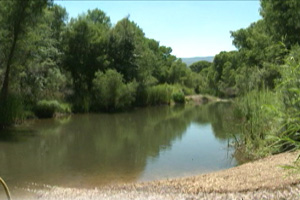 The Verde River Greenway State Natural Area is adjacent to the Verde River one of Arizona’s last free-flowing rivers. It’s a dream for bird spotters since over 100 species of nesting and migrating song birds, raptors and waterfowl have been sighted along the greenway, with additional sightings in adjoining Dead Horse Ranch State Park. The Verde River Greenway is a wonderland that changes with the seasons to the delight of nature lovers.

Currently, the greenway is a 480-acre, six-mile long riparian area, which encompasses the Fremont Cottonwood/Gooding Willow Riparian Gallery forest, one of five remaining stands in Arizona and one of 20 such stands in the world. In addition to birds, the thick stands of cottonwoods and shrubs along the banks of the beautiful, winding Verde River also support nearly 20 threatened or endangered species, including river otter and lowland leopard frogs. Greenway visitors can also get a glimpse of coyotes, raccoons, mule deer, beavers and other animals.
The greenway is a recreational delight for hiking, fishing and picnicking, and for those who want to experience the Verde River in a canoe or kayak along the Verde River Paddle Trail, which stretches 6.5 miles from the Tuzigoot Bridge to the Highway 89A Bridgeport Bridge. There are several access points for river paddlers: at Dead Horse Ranch State Park in Cottonwood as well as undeveloped access points at the Tuzigoot Bridge in Clarkdale and the 89A Bridge in Bridgeport.