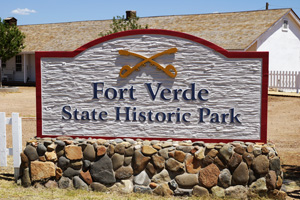 In the Verde Valley around Camp Verde there is archeological evidence of human habitation dating back over 2,000 years. From about 600 to 1100 AD the region was occupied by people of the Hohokam culture. Around 1100 AD the Sinagua people from the North migrated into the area as evidenced at Montezuma Castle a five story cliff dwelling on nearby Beaver Creek.

Modern history started in the 1860’s as pioneer farmers, miners and cattlemen settled into the Verde Valley. The first military establishment was a temporary post overlooking the farms at West Clear Creek. In 1865, the next post, Camp Lincoln was established. In 1865 the name was changed to Camp Verde. The post was moved to its present day site in 1871, due to the onset of a malaria outbreak. In 1878, the name was changed to Fort Verde to signify permanence. The fort was occupied from 1871-1891; with the post officially closing in April of 1890.

Over the years the community recognized the value of protecting and preserving this historic site, which is what, prompted a request that it be established as a Historic State park, in 1970. Today, visitors can tour the four remaining adobe buildings, one of which is a museum with exhibits and displays that portray life on the frontier.