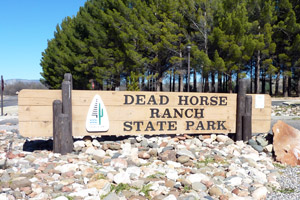 The developed portion of Dead Horse Ranch State Park covers 423 acres. The 3,300 foot elevation accounts for the mild temperatures that are ideal for camping, mountain biking in the Coconino National Forest, hiking along the Verde River, canoeing, picnicking, fishing, or just wading in the cool water.

A six-mile reach of the river is known as the Verde River Greenway State Natural Area. Its unique ecosystem, the Cottonwood and Willow riparian gallery forest, is one of less than 20 such riparian zones in the world. Life along the river changes with the seasons, giving visitors a glimpse of the numerous species of raptors, neotropical migrants, resident songbirds, mammals, reptiles, amphibians, and fish.

How Dead Horse Ranch Got Its Name…

The story of the park’s name begins with the Ireys family, who came to Arizona from Minnesota looking for a ranch to buy in the late 1940s. At one of the ranches they discovered a large dead horse lying by the road. After two days of viewing ranches, Dad Ireys asked the kids which ranch they liked the best. The kids said, “the one with the dead horse, Dad!” The Ireys family chose the name Dead Horse Ranch and later, in 1973, when Arizona State Parks acquired the park, the Ireys made retaining the name a condition of sale.