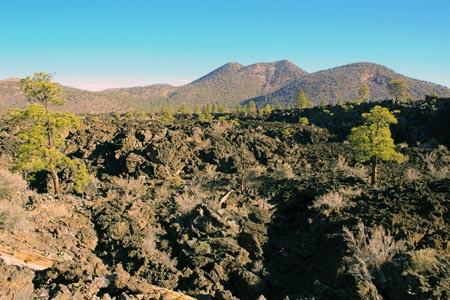 Address:
6400 U.S. 89 Flagstaff, AZ 86004
What happens when the earth cracks open beneath you, spewing hot cinders and poisonous gases high into the air? Just 1,000 years ago, that happened at Sunset Crater Volcano. At first, it must have been terrifying. Plants burned, and people and wildlife fled. But as ten centuries have passed, life has slowly returned, beautiful and strong.  At the Visitors Center you can learn what rangers, scientists, and visitors like you have discovered through the preservation of Sunset Crater Volcano.    People had been living here for several hundred years, at least, before the volcano erupted. Although we don’t know what they called themselves, archeologists consider them representatives of the Sinagua culture. They were farmers, living in scattered groups adjacent to their corn fields.    Their homes were pithouses, dug partially into the ground.

These people lived their lives in a landscape much like what we see today - pine forest and occasional open meadows, framed by the San Francisco Peaks and other ancient volcanoes. Then, about 900 years ago, a new volcano emerged literally before their eyes.

There must have been enough warning for the inhabitants to move out of harm’s way; no evidence has been found that people died as a direct result of the eruption. However, pithouses for miles around were burned and filled with cinders, and others undoubtedly remain buried beneath layers of lava.